Holsters Custom Made for the Revolvers of the Old West

Many of the folks that lived during the mid to late 1800s depended on their "shooters" as they went about their day to day activities.  While a few of these pistols are available to collectors, there are also some beautiful reproductions available from companies such as Uberti and Pietta.  Each of these fine pistols deserve to be wrapped in custom leather.

Here are some of the "period" pistols I have available for creating custom leather:

The gallary below shows some examples of the leather products created for these pistols.

Here's some examples of holsters made for the 1873 Single Action Army and similar revolvers.

Here's an example of a Bandolero Rig made for a gorgeous 1875 Outlaw by Uberti. it features a fully covered trigger guard, reinforced throat and snapped hammer strap retention.

This Mexican Loop holster was made for the 1858 Remington. It features  "Navejo inspired" tooling on the face, full pig skin suede lining and "long strap" snapped retention.

"Slim" Holsters for a Colt 1860 Army with 8" Barrel. These holsters feature a reinforced throat and hammer thong retention.

This holster was built for a Colt 1851 Navy Snub Nose with 3" Barrel. The top two photos were taken with my holster drone and the bottowm two were sent to me by the customer. This holster is a cross draw with a hammer strap fastened with a Sam Browne stud.

Western Holsters for a Colt 1860 Army Snub Nose with 3" Barrel.

This is an example of a holster for the Colt 1862 Pocket Police. It features a cavalry flap closure with a Peacock tooled on the front face. 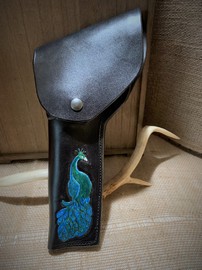 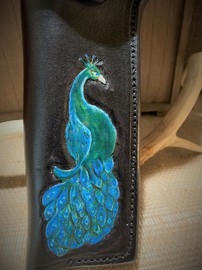 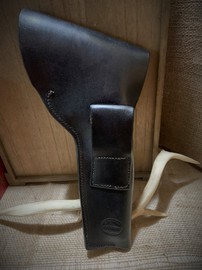 Examples of holsters for Smith and Wesson Model 3 Schofields.

A Custom Western Holster for a Colt Snub Nose 1862 "Avenging Angel" by Pietta. It features a reinforced throat and hammer thong retention 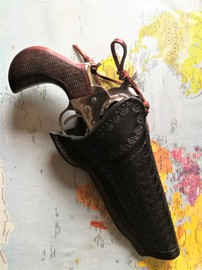 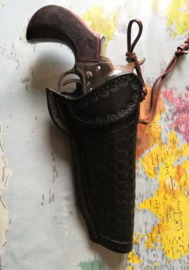 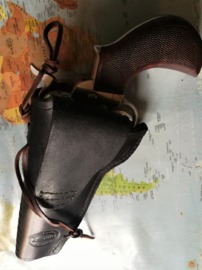 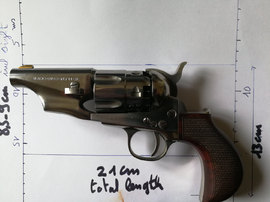